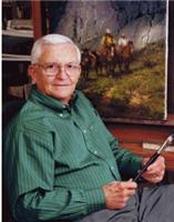 Harvey's art has intrigued and captivated a generation. his skilled use of light in dramatic settings, his considerable talent and persistent striving toward perfection have placed him and his work at the forefront of late twentieth century American art.

G. Harvey grew up in the rugged hills north of San Antonio, Texas.

His grandfather was a trail boss at 18 and helped create an American legend. So the American West is not only the artist’s passion but his birthright.

Harvey's early interest in sketching and drawing slowly evolved into a passion for painting in oils. G. Harvey attended the Univeristy of North Texas and then transferred to University of Texas at Austin. G. Harvey soon realized that weekends and nights at the easel did not satisfy his love of painting. Harvey paints the spirit of America from its western hills and prairies to the commerce of its great cities.

He abandoned the security of a full-time job in 1963 and threw his total energy into a fine art career.Two years as a "struggling artist" followed, but 1965 brought acclaim for the artists first prestigious show, The Grand National exhibition in New York, and the American Artists Professional League presented him with their New Masters Award. President Lyndon Johnson discovered his fellow Texans talent, became a Harvey collector and introduced John Connally to the artist’s work Connally was enthusiastic about Harvey's art and, on one occasion, he presented a G. Harvey original to each governor of Mexicos four northern states.

His original paintings are in the collections of major corporations, prestigious museums, the United States government, American presidents, governors, foreign leaders and captains of industry. The Smithsonian Institution chose Harvey to paint "The Smithsonian Dream" commemorating its 150th Anniversary. The Christmas Pageant of Peace commissioned Harvey to create a painting celebrating this national event. He has been the recipient of innumerable awards and the subject of three books. Through his art, our history lives.

Today, G. Harvey lives in Fredericksburg, Texas, with his wife Pat in a 150-year old stone home built by German settlers. His studio and residence are nestled within the Historic District of Fredericksburg