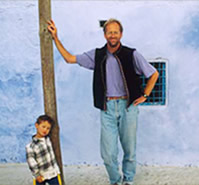 Jim Nilsen spent twenty years fishing commercially and photographing in Alaska. During his fishing years he obtained a degree in photography from Spokane Falls Community College. His photos of the commercial fishing industry have been widely published on magazine and book covers, calendars, and even a billboard in Canada.In 1991, Jim made the decision to jump ship and pursue his real love, photographing colorful scenes in colorful places, most of which happen to be outside of the United States. Foreign locations visited so far include Brazil, France, Greece, Guatemala, Italy, Mexico, Morocco, and Puerto Rico. Domestically, Jim has photographed in New Orleans and the Southwest.

Jim resides in Edmonds, Washington with his wife Magrit and their cat Roshi.

The novelist, Isabel Allende, writes beautifully and about the photographic process in her book Portrait in Sepia. Jim finds the following excerpt particularly meaningful."If you observe an ordinary object or body very closely, it is transformed into something sacred. The camera can reveal secrets the naked eye or mind cannot capture; everything disappears except for the thing that is the focus of the picture. The photograph is an exercise in observation, and the result is always a stroke of luck.

The camera is a simple apparatus, even the most inept person can use it; the challenge lies in creating with it that combination of truth and beauty called art.

The quest is above all spiritual."