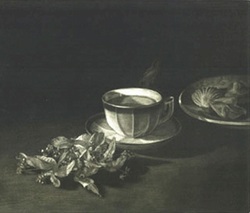 Judith Rothchild was born in Boston in 1950. She studied visual art at the Rhode Island School of Design before moving to Europe to continue her training at the Academy of Applied Arts in Vienna. Since 1996, she has devoted herself to mezzotint printmaking, for which she has established a strong international reputation over the last ten years. Judith Rothchild lives and works in a small village in the Languedoc region of France.